Being Jesus’ body, living His mission

The Church at Highland is a strong family of faith.  Our faith is in Jesus alone.  God has given us an amazing unity.  With God pouring into our lives a love that is so overwhelming, we cannot contain it, nor do we want to contain it.  This love compels us to be about the work Jesus started and continues through His Body today.  Now, our mission, as set forth in the Great Commission (Matthew 28:19-20), is being lived out here in Pulaski and into other parts of the world. 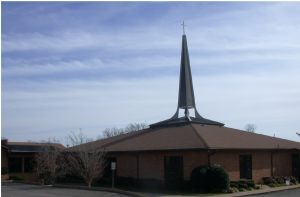 In 1959, there was birthed a vision for a mission church on the southwest side of Pulaski.  Almost simultaneoulsy, two different groups found themselves praying about starting a church.  One group attended revival services in September 1963.  Thirteen people who were present at those services banned together and became "Highland Baptist Mission".  The other group of people were members of Pulaski's First Baptist Church.

In the early stages, just after each separate group began to put feet to their prayers, the two groups discovered each other and how similar the vision was for both.  They joined forces.  "Highland Baptist Mission" began meeting in a home for times of worship and called their first pastor, Rev. Hoyt Wilson, January 15, 1964.  The original building was completed September 20, 1964. The church was officially constituted on September 25, 1966.

A miraculous rate of growth took place in those first few years as the church grew from 13 members when the mission began to 134 members by the time it became an officially constituted church.  The laborers have been many and the community of Pulaski and surrounding Giles County has been impacted by this movement of God.

Godly men have served the church in a variety of ways.  The men who served as pastor and their dates of service are listed below.

Highland has ministered to hundreds of people.  The mission of the church is wrapped tightly to the Great Commission.  Staying true to its purpose, Highland has reached hundreds with the Gospel and has seen a large number of baptisms.  People from several generations have grown strong in their faith through the ministry of Highland Baptist Church.  The ripple effects of this church's ministry are farther reaching than can be explained on this small page.  Several former Highland members are now themselves serving all over the United States and some have ministered in places around the world.

These are bright spots in our history by human standards and we are thankful to God for them, but we recognize by eternal standards these victories are amazingly small.  Highland built a parsonage in 1973.  All properties and buildings were paid in full in 1981.  In 1984, the church entered into a "Together We Build" program.  The Christian Life Center was started in 1985 and the new worship center was started in 1986.  Both buildings were completed in 1987.

From our history, we can see times of struggles.  From those, we have learned.  Also, from our history, we recognize many triumphs.  Using those triumphs as markers to remind us of how God has worked powerfully in our past, we place our hope in Him for our future.  With the foundation of faith laid down by present and past generations of Highlanders, we believe the best is yet to come and we trust Jesus to lead us day by day!